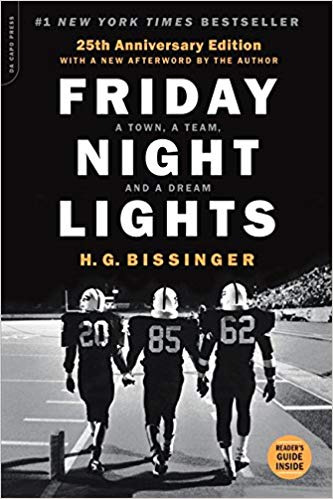 It has been a long time and a lot of miles since I last read Friday Night Lights.  At the time, I had lived in only one state in memory and had ventured beyond my small hometown just to the weird cocoon of college (and the even weirder cocoon of grad school).  Since then I’ve lived in six more states, worked in three professions, and started a family.  Notably, I did a swing through Texas itself, if there can be any comparison between Houston and Odessa (probably not, no).  I consumed the movie and TV series the book produced and gobs of movies and TV and fiction and nonfiction besides.

I almost put Friday Night Lights: A Town, a Team, and a Dream down as soon as I picked it back up.  The book starts off displaying some of the worst pretensions, literary and otherwise, that I have come to despise.  Bissinger is a smug, elitist asshole.  But don’t let that fool you—he has written a phenomenal book.  By dint of luck and talent, if not good intent, he captured a magic, manic season in a place gutted by an oil bust and gone mad for football.  This is a book well worth reading whether or not you care about high school football or that big empty part of Texas.

(My review, by the way, is of the version featuring a new afterword written a year after the original edition was published, not the 25 year anniversary edition.)

You can tell the big empty part got to Bissinger.  He isn’t a small town, heartland kind of guy.  This book will be immortal for, if nothing else, the single most flyover-y passage every written about flyover country:

It was a view every traveler had seen a million times before, and maybe if you were a passenger on a plane bisecting the night, you looked down and saw those lights and wondered what it would be like to live in an Odessa, to inhabit one of those infinitesimal dots, to be in a place that seemed so painfully far away from everything, so completely out of the mainstream of life.  Perhaps you wondered what values people held on to in a place like that, what they cared about.  Or perhaps you went back to your book, eager to get as far away as possible from that yawning maw that seemed so unimaginable, so utterly unimportant.

Bissinger overcame his prejudices about a place “so unimaginable, so utterly unimportant.”  Or at least overcame them enough to explore it and to meet the alien creatures that inhabit it.  He chose the one town and school that rose above all others when it came to absolute high school football madness: the Permian High School Panthers, located in Odessa, itself located far west of civilized Texas, but close to Midland.  Thankfully, the flights of literary fancy disappear early on in the book, but this is a mighty fine description of Odessa:

It was still a place that seemed on the edge of the frontier, a paradoxical mixture of the Old South and the Wild West, friendly to a fault but fiercely independent, God-fearing and propped up by the Baptist beliefs in family and flag but hellraising, spiced with the edge of violence but naive and thoroughly unpretentious.

(West Texas is a long, long way from the South, but still.)

It is Bissinger’s depictions of the good people of Odessa elsewhere that got him in trouble.  Bissinger spent a year embedded in Odessa, living with and among the people of Odessa, not just attending their football games but shopping at their grocery stores and everything else.  He left the people of Odessa thinking that they would get one sort of depiction.  He gave them another.  In his acknowledgments, Bissinger says that he had “never found a group of people more down-to-earth, more honest, more willing to express their opinions without restraint.”  The first two are largely absent from Bissinger’s narrative in the book proper.  I can see him snickering over the last one, which he likely saw as naivety he could exploit.

But then he just gave the good people of Odessa the rope.  They chose to hang themselves with it.  How much can you really blame him for just repeating what you said? 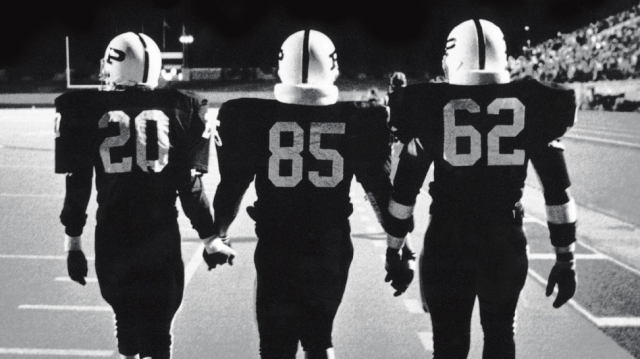 Friday Night Lights is structured around the 1988 Permian Panthers high school football season.  The 1988 season would see the Panthers only make it to the playoffs courtesy of a coin toss (you couldn’t make that up) but make it all the way to the state semifinals (not the finals as depicted in the movie).  They lost in the state semifinals to the Dallas Carter team I talked about two weeks ago.

Bissinger’s narrative focuses on five players from that team.  Brian Chavez, the future valedictorian of his high school class and Harvard graduate, son of a police officer-turned attorney, terror on the field.  Jerrod McDougal, an undersized offensive lineman who would be dropped entirely from the movie adaptation and who admittedly has the least interesting story here.  Don Billingsley, the troubled party animal, the son of a former Permian star, a talented running back with problems holding onto the ball.  Mike Winchell, the starting quarterback, a great quarterback when he isn’t under pressure, too ashamed of his house to let his girlfriend come over.  Ivory Christian, the high school preacher, the only senior from the team to sign a D1A scholarship.  Most of all Boobie Miles, the flamboyant and preternaturally talented running back whose struggles after his knee injured provide the spine of the story.  (Coach Taylor would dominate the show, but Gary Gaines plays more of a bit part here.)

Bissinger tends to tut tut about all this, but he runs into a Truffaut Was Right problem when he talks about football and the oil boom.  He makes it all sound fun because it may not be possible to make it sound any other way.  Even with all that effort to show how out of whack the town’s priorities seem, even with the post-oil boom hangover front and center, even knowing that murders again surged in Odessa as oil again boomed.]

Had Bissinger tried to write a novel after his year in Odessa, I’m sure it would have been terrible.  In nonfiction Bissinger can tint the glass, but he can’t hide the verisimilitude of telling a real story.  It was a remarkable season in a remarkable place, but one just the same that is grounded in the basic realities of human nature.  We can imagine it because none of it is odd, even if it is far-fetched.

This concludes Friday Night Lights Fridays.  You can find all of my posts here.