“I don’t want to go back to jail, but if it means helping Kentucky and helping my kids, I’ll do it.”

There are two basic problems with academic books for a popular audience.  The first is that the academic writing is frequently atrocious.  The second is that the topic is often very narrow.  I am glad to report that the first is not an issue with Wilkerson’s book.  The prose is competent, if pedestrian, and Wilkerson avoids the jargon-laden incoherence that has overtaken the social sciences.  The second isn’t exactly a problem, but there is only so big an audience for a book that talks only about poor, female activists in Kentucky coal country in the wake of the War on Poverty.  I might not have picked up To Live Here, You Have to Fight had I appreciated just how narrow the subject matter was, but nevertheless I am glad I did.  The result of a narrow focus is a depth that pretty much ensures you will learn something.

Wilkerson covers a time period that starts with “the top-down, federal War on Poverty from 1964 to 1968,” but her story stretches beyond the short-lived War on Poverty itself to “the grassroots war on poverty reverberated for over a decade.”  Appalachia got pulled into the War on Poverty for political reasons, which is about as good as we can expect, I suppose.  Appalachia’s perceived (and, for the most part, actual[1]) whiteness was used to blunt the racial connotations of the anti-poverty program.  The War on Poverty may have been much less successful than the New Deal, per Wilkerson, but it had two goals: economic development and “access to health care, food, water, and education.”  Importantly, pursuit of this second goal “invited local people to participate in solving problems” with “Community Action Programs (CAPs) [that] made decisions about funding and brought together stakeholders across multicounty regions.”

That second goal allowed the participation of local, poor and working class women like Granny Hager, Edith Easterling, and Eula Hall.  Wilkerson specifically focuses on Kentucky coal country.  After all, the image that “came to represent the War on Poverty” was taken in eastern Kentucky.

Discussion of Appalachia is driven in significant part by such images.  There is a sense that outsiders see them as a fair representation of Appalachia.  The reaction against that often results in ignoring poor and working class hillbillies entirely.  Wilkerson focuses on activists who were “solidly working class” like Edith Easterling.

As the book progresses, the focus shifts from poverty alleviation to welfare activism to employment opportunity.  The initial, vigorous push inevitably leads to a conservative backlash.  The new programs upset the power structure and political balance in rural counties that were dominated by upper and middle class locals[2] and most of all the coal operators’ associations. [3]  They were frequently less opposed to welfare programs than to funds they didn’t control, with the political and social power that comes with it.

This is a story that takes place after the glory days of Appalachian coal.  “An out-migration that had begun in the 1920s sped up as war industries attracted workers from Appalachia.”  But many of the women who left would return to Appalachia (Edith Easterling worked in a munitions factory in Michigan during WWII).  The pull from industrial opportunities would be complemented by a push from reduced opportunities in the coal mines due to increased mechanization.  Violence over the mines, though, continued.  And the people of the region were left with little to show for it.  The broader area still “lagged behind in their access to electricity, plumbing, and paved roads.”

Wilkerson writes plainly but doesn’t break from orthodoxy.  You get some things you come to expect from contemporary academic writing.  “Democratic” is used to mean generically good.  “Capitalist” is used to mean generically bad.  “Neoliberalism” is used as an epithet.  Mostly this is irrelevant, although sometimes it hurts Wilkerson’s argument.  She expects the reader to accept “anticommunist” as bad.  I suspect she is right—her narrative betrays no communist sympathy, interest, or even inclination among the female poverty activists on which she focuses—but given this was during the Cold War and given (as she admits) the National Miners’ Union had communist backing, we can’t dismiss anticommunist motivation out of hand.

On the other hand, I learned a useful term—“social reproduction”—I might not have been exposed to otherwise.  Borrowing another scholar’s definition, Wilkerson describes social reproduction as the “array of activities and relationships involved in maintaining people both on a daily basis and intergenerationally.”  Wilkerson adds that “[t]hese activities include raising and socializing children, caring for oneself, preparing food, cleaning living quarters, buying consumer goods, and maintaining ties of family and kin.  The majority of this labor—both paid and unpaid—has historically fallen to women.”

Wilkerson’s pinched view of capitalism causes her to misuse the term, though.  The idea that capitalism “strain[s] and threaten[s] social reproduction” would come as news to anyone who owns a washing machine.  The idea that capitalism cannot “sustain life” would come as news to anyone who has watched capitalism allow hundreds of millions of people to lift themselves out of extreme poverty over the past few decades.  But it is a useful term, nonetheless, and Wilkerson is right that caregiving labor and social reproduction are both a background condition of possibility for capitalism and underappreciated.

I don’t mean to say that capitalism—especially as practiced by coal companies in Appalachia—isn’t vulnerable to criticism.  Rather that you can’t effectively criticize aspects of capitalism if you fundamentally don’t understand it.  That, though, is no real criticism of the book.  Wilkerson gives us enough information to draw conclusions of our own.

The poverty of the area and the informal role of the women who star in Wilkerson’s book lead them to wear many different hats over the course of the book: mine picketer, community organizer, unofficial social worker, driving instructor, preserver of mountain culture,[4] agitator against strip mining, and coal miner.

There were complaints about activists who “cared more about their ‘theories’ than about working on the major issues confronting Appalachians” (an evergreen issue).  There were tensions between insider and outsider activists over, for example, the Vietnam War.  When the Appalachian Volunteers chose to keep an activist from California over her, Edith Easterling was deeply offended.  Wilkerson points to her belief it “was a sign that the organization no longer valued local people’s opinions and leadership.”  I would add that Easterling was quick to return to a hillbilly suspicion of outsiders, even after having worked with the Appalachian Volunteers for years.

To the extent the women of the book can fairly be labeled feminist, they looked very different from the more prominent feminists of the day.  There was a sharp divide between the working-class feminism they represented and the “middle-class feminists who shaped policy decisions.”  The hillbilly women were old-school, looking “more like the ‘social justice feminists’ who were active between the 1930s and the 1960s than they did second-wave feminists.”

The “grassroots war on poverty” that started with the top-down War on Poverty and continued after it sputtered out are a good reminder that big programs still have to be run at the local level, and much of the knowledge and motivation to make them work only exists in local communities.  Local poor people provide not only necessary knowledge and motivation but democratic legitimacy.

So what does this mean for the debate between Hillbilly Elegy and Appalachian Reckoning over “structural” causes of poverty?  Local poor, of all people, understand that culture is relevant to poverty.  Does an antipoverty activist making a distinction between “sorry families” and respectable ones really sound all that different from complaints by Kentucky governor Louie Nunn that poor people who felt entitled to welfare lacked self-respect?  Groups working to provide legal services to the poor noted that many people from the most rural areas thought “they have greater measures of some rights (such as public assistance) than they actually have.”  Poor people who are there don’t have the luxury of messy, embarrassing, awkward facts just because they don’t accord with their theories.

Beyond the core theme, there is a lot in here, including tidbits from a rich, often ugly history that go beyond the narrow subject of the book and should be of interest to any general student of Appalachia and hillbilly studies.

Wilkerson describes an African-American community with no roads—they had to get to town by taking a boat down the river—but that didn’t stop arsonists from burning down their schoolhouse.

“All but three of the adult men in” Fraterville, Tennessee died in a Coal Creek Company mine in 1902, “leaving behind 1200 widows and children.”

Edith Easterling’s grandmother caught a neighbor who was so hungry he snuck into her house and ate lard out of a bucket in her kitchen (her grandmother fixed him some food and sent him home with more for his wife and kids).

Kentucky had its own Un-American Activities Committees, and it had a sedition law that the Supreme Court of the United States ruled unconstitutional.

David Duke held a Klan rally in Harlan County “on the property of an antiunion coal operator.”

One reason coal companies fought unionization so hard in Appalachia was to offset much higher freight costs.  It seems obvious in retrospect, but I can see how I missed it.  I am more interested than Appalachia than in coal in general, and the violence that resulted from those strenuous anti-union efforts has made coal and Appalachia almost synonymous in the US. 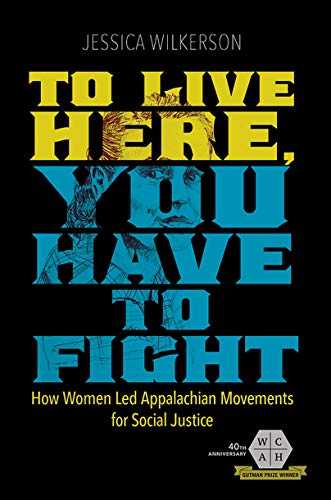 In the end, I am plenty glad I picked up To Live Here, You Have to Fight (what a title!).  Wilkerson picked a fascinating topic that is surely underserved in the existing literature (the book was adapted from her dissertation, so her first priority was advancing the literature).  In exploring that topic, Wilkerson avoids allowing academic theories of her own to lead her to erase the lived experiences of hillbillies.  Others insist the hillbilly reputation for violence is entirely a stereotype; Wilkerson implicitly acknowledges it in her title.  How could she not?  Her story is one of feisty women in a place that seems to breed them.  Telling the story of these remarkable women requires a greater comfort level with them than their own culture offered.

So it is a narrow work.  It starts with the War on Poverty and ends in the 70s with the move toward focusing on employment rather than caregiving.  It examines one gender (female), one class (working class, really, not even the poor), in one very specific region (Kentucky coal country).  But, for the reader willing to dig a bit deeper, it should be of interest not only for students of Appalachia and hillbilly studies, but also students of the history of feminism, community organizing, the War on Poverty, and the labor movement.

Disclosure: I received a review copy of To Live Here You Have to Fight via NetGalley.

[2] “Edith argued for a new road so that rural children could ride buses to school.  The superintendent fired back that if families chose to live in hollows, then they deserved to walk in the mud.”

[3] One Harlan County judge, with a truth-is-better-than-fiction name of F. Byrd Hogg, who was particularly notorious for siding with coal companies was eventually revealed to be a coal operator himself.

[4] “The school also aimed to preserve mountain culture, offering classes on traditional music and crafts to visitors.  Organizers held evening square dance and teaching sessions for banjo and fiddle, and they published ballads that spoke to the ongoing struggles in the mountains.”

2 thoughts on “Nonfiction: To Live Here, You Have to Fight by Jessica Wilkerson”