I had planned to write a post featuring Hank Williams’ The Complete Health & Happiness Recordings on Friday, the day it was released.  I was short on time, so I just highlighted it on Twitter and Facebook and moved on about my day.  But I’ve been listening to it all weekend, and it is an absolute treasure.  I can’t let it go unmentioned here.  So on the day after Fathers’ Day, let us remember the granddaddy of them all, Hank Williams Sr. (speaking of fathers and grandfathers, I really need to highlight Hank Williams Jr. and Hank III on these pages). 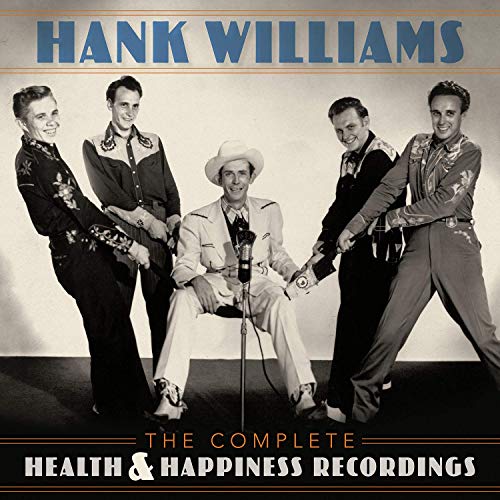 The Complete Health & Happiness Recordings have much to recommend them, and not just to the Hank Williams completist.  The recording quality is very high.  Decide for yourself whether Hank’s wife Audrey had any business getting paid to sing.  Very lively fiddle from Jerry Rivers perk things up from Hank’s studio material.  Decide for yourself whether Rivers is likely to saw that fiddle slam in two.

I Saw the Light has been one of my favorite gospel songs for longer than I’ve known who Hank Williams is.  Rivers fiddle results in a peppier version than I’m used to.  As a firm proponent of more fiddle in church, I approve.  Also included in the only known recording by Hank of The Tramp on the Street.  Recorded over eight radio shows, each carves out time for a gospel song.  I mean, you’d have to be just about ass-ignorant to imply that Hank Williams or Johnny Cash never sang gospel.

There is a lot of talk about representation these days, much of it silly.  But when I turn on these recordings, I hear people who talk like me, whether it is Hank Williams or the host, Grant Turner.  I don’t get a lot of that on the radio or on TV.  Hank talking between songs is one of the chief highlights of these recordings.  He has a magnetic voice and obvious charisma and charm.

Recording over multiple shows, there is considerable repetition here, albeit not unwelcome.  They open each show with Happy Rovin’ Cowboy and close each show with Sally Goodin’, with only three or four songs in between.  Hits Wedding Bells and Lovesick Blues each appear twice.  Hank closes each show the same way: “If the good Lord’s willing, and the creeks don’t rise, we’ll see you agin ‘fore long.”

I Saw the Light

The Complete Health & Happiness Recordings are available now from Amazon.

Music Monday is the brainchild of Drew at The Tattooed Book Geek.

You can find every video featured in 2019 for Music Monday here.