I spent last week in Canmore, Alberta.  Canmore is a little mountain town nestled just inside the Canadian Rockies shortly before you reach Banff National Park.  I didn’t know ’til I got there that Canmore used to be a coal mining town.

Queen Victoria herself granted a charter for coal mining in Canmore (well, she probably in reality had little to do with it . . . but it was issued in her name).  The first coal mine in Canmore was opened in 1887.  Canmore remained a coal mining town for the next 92 years.  I might not have realized the history but for happening to be in town on the 40th anniversary of its last coal mine closing.

I consider myself blessed to hail from mountains free of coal.  The resource curse is real.  All that coal didn’t make eastern Kentucky and West Virginia any better off than eastern Tennessee and western North Carolina.

We isn’t to say that Canmore isn’t doing well.

The two most important types of coal for coal mining are bituminous and anthracite.  Anthracite is the higher grade and more valuable.  It burns hotter and more efficiently.  It is also much rarer and frequently more dangerous to mine.  Canmore, like West Virginia, was rich in anthracite coal.  West Virginia has traditionally been the most dangerous place to mine for coal in the United States; 42 men would die during Canmore’s 92 years of coal mining.  The Canmore coal seams were filled with explosive methane gas.  The mines were also so steep that men had to be winched down into the mine on cars with heavily tilted seats.

For the Canadian Rockies leg of our trip, we chose between staying in Banff and staying in Canmore.  I was told Canmore is the less touristy of the two.  My first thought walking the streets was “this is really touristy,” but, after spending time in both, it is definitely less touristy.  You can walk through downtown Canmore and still see businesses that don’t cater exclusively to tourists.  You can even still see the remnants of its hippie mountain town era.  But you won’t see coal miners.

There is a natural progression for mountain towns, in my experience.  From frontier agriculture to small-scale industrial to hippie mountain town to fully gentrified.  (More or less, and at drastically different rates from place to place.)  Even where the coal ain’t, the small factories that provided so much relative employment are disappearing with the rest of US and Canadian manufacturing jobs.  The heyday of the timber industry is long over.  Natural resources you can’t take with you and low prices attracted a bohemian element.  The mountain hippies in turn attracted the Bobos—David Brooks’ portmanteau for a bourgeois class with would-be bohemian sensibilities.

Here is the thing about Bobos: there are a lot of them and they have a lot of money.  The economics are simple from there.  The itty-bitty two-bedroom condo we stayed at in Canmore would sell for at least half-and-again what our five-bedroom house in a small Rust Belt city would.

Which maybe makes for a decent vacation spot, if an expensive one.  Lots of craft beer, lots of brewpubs.  It’s nice, but I think I would be just as happy and a little richer for it staying at a crappy motel and drinking Budweiser on the balcony so long as it has a mountain view.  (I grew up going to Maggie Valley and Gatlinburg in the 80s/90s—I can do low-rent.)

A little Boboification makes my hometown a most attractive place for a potential return move.  Much more Boboificaiton and I won’t be able to afford to go back.  I can’t say that it doesn’t beat the alternative: towns like J.D. Vance’s Jackson, Kentucky, like the towns in Appalachia and Wales covered in Tom Hansell’s After Coal ain’t exactly good places to live.  No Bobos and there aren’t jobs so mountain people can thrive there; Bobos arrive and they drive prices up so mountain people can’t afford to live there.  Bobos, like coal, are very much a double-edged sword. 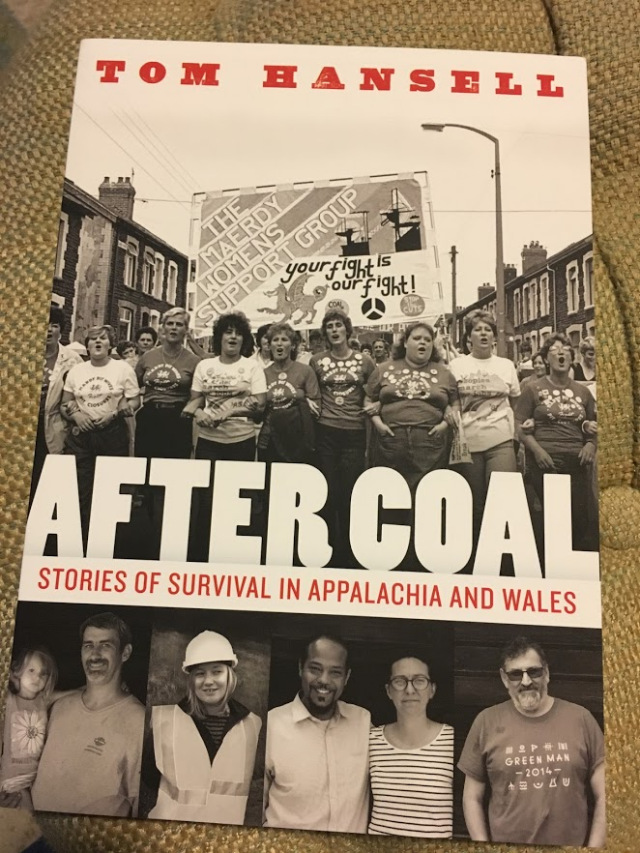 I’m not willing to let the mountain hippies off the hook either.  They’re the ones who attract the Bobos (it certainly isn’t us).  And they are only marginally less vacuous than the Bobos, though they have a little more grit and only indirectly drive up rents.  Neither gives a shit about the people who were there before they were.

All of this is meandering and doesn’t quite have a point.  Which is pretty true to how I feel about the matter.  I will leave you with the end of a poem on the sidewalks of Canmore:

That mirror world is dark now.

The men laid down their tools,

to the surface, home.

2 thoughts on “Life in the Mountains After Coal”