I went to a panel at the WorldCon in San Antonio a few years back on Texas Pulp SF.  Apart from the 800-lb. gorilla in the room, Texans were grossly underrepresented in the pulps.  The consensus was that they were writing speculative fiction, and good speculative fiction, but that it was getting published as folklore.  That struck close to home.  I sometimes say I didn’t discover speculative fiction until my mom forced The Hobbit on me, but that isn’t quite true.  Growing up in the mountains of North Carolina, I grew up with ghost stories.  Much like that Texas “folklore.”  The difference, of course, merely being one of perceptive.

You can imagine my interest then, when I discovered that an Appendix N and Weird Tales stalwart, Manly Wade Wellman, wrote an entire series of short stories very much rooted in the lore of my people.  About John.  At least that’s the only way his name is given in the stories.  He is more usually known as John the Balladeer or Silver John.  He may also be a parallel universe Johnny Cash.  Or maybe John the Baptist.  Or maybe both.

I picked up a copy of Paizo’s Hidden Worlds and Ancient Mysteries Planet Stories, The Complete Tales of Silver John, Who Fears the Devil?, presented by (and with an introduction from) Mike Resnick (2010).  Unfortunately, it is now out of print and offered at an obscene price every time lately I’ve checked on Amazon.  This is billed as a complete collection of the Silver John short stories, but Wellman also wrote five novels about John.  Haffner Press’ upcoming The Complete John the Balladeer.  The two-volume edition will contain all five novels and is available for pre-order now.

END_OF_DOCUMENT_TOKEN_TO_BE_REPLACED

I had the intense pleasure of living in Houston for four years this past decade.  But my fondness for my time there did not prevent my pleasure reading this collection of noir tales exploring Houston’s fetid underbelly.

I loved it there, and Houston has a better crime rate than, say, Chicago or New Orleans, but this is still a place where the old-fashioned burglar bars on our house were a good idea, where a man was shot in an drive-by a block away from my house, where a body was found in nice, new apartments under construction that marked my neighborhood as “transitioning,” where bodies were occasionally fished out of the bayou that ran a block from our house (sometimes closer).

The copy and intro both include a wonderful, vicious Hunter S. Thompson quote describing Houston as a “cruel, crazy town on a filthy river in East Texas with no zoning laws and a culture of sex, money, and violence. It’s a shabby, sprawling metropolis ruled by brazen women, crooked cops, and super-rich pansexual cowboys who live by the code of the West—which can mean just about anything you need it to mean, in a pinch.”  It says something about Texas that the immediate response is to say “hell yeah!” and adopt the quote as a point of pride.

END_OF_DOCUMENT_TOKEN_TO_BE_REPLACED

Burning Bright is another collection of short stories set in and around rural Western North Carolina by the master, Ron Rash.  I think I would rank it third among the collections I’ve read, behind Chemistry and Other Stories and then Nothing Gold Can Stay, but that’s sainting with faint criticism.  There is nothing quite so good as Blackberries in June or Speckled Trout, but there also isn’t a truly weak story.

END_OF_DOCUMENT_TOKEN_TO_BE_REPLACED 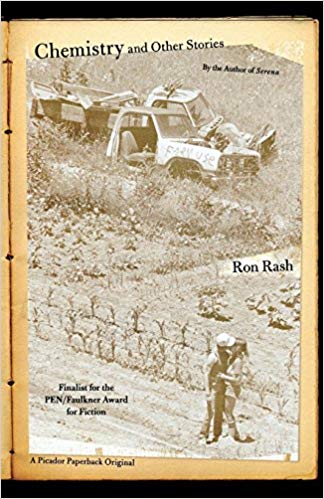 13 Short Stories That Peer into the Soul of Southern Appalachia.

Ron Rash writes about my native soil—western North Carolina—and Lord does he write them well.  The Tuckasegee winds through my memories of college like it winds through Cullowhee (Their Ancient, Glittering Eyes).  I grew up hearing stories about a kid from Shelby that was better than Michael Jordan ever was and threw it all away for drugs (Overtime).  Where I grew up, you knew the drug dealers, and you knew their daddies (Deep Gap).

The final question of Blackberries in June has kept me up late at nights.  Chemistry, Last Rite, and Cold Harbor all address the (emotional) pain of death from a different perspective.  Chemistry, Last Rite, and Blackberries in June are powerful looks at family.  Not Waving But Drowning and Deep Gap expose the awfulness of that which you care most about slowly drifting form your grasp.  Blackberries in June, Overtime, The Projectionist’s Wife, and Deep Gap show a deep bitterness that runs through a downtrodden people.  Honesty and Pemberton’s wife offer a window into the hatred and contempt with which outsiders view highlanders.  Speckled Trout cuts deep.

END_OF_DOCUMENT_TOKEN_TO_BE_REPLACED

The Daniel Woodrell short stories collected in The Outlaw Album have two things in common—they’re set in the Ozark Plateau and they are about violence.  It’s the stuff of Ron Rash and Cormac McCarthy, Chris Knight and James McMurtry, Jesco White and Popcorn Sutton.

The stories of The Outlaw Album are short, ranging from as low as 6 pages to as long as 28 pages.  The stories generally get longer—and more difficult—as you go.  There are also uncommonly strong across the board, only The Horse in Our History leaving me unmoved.