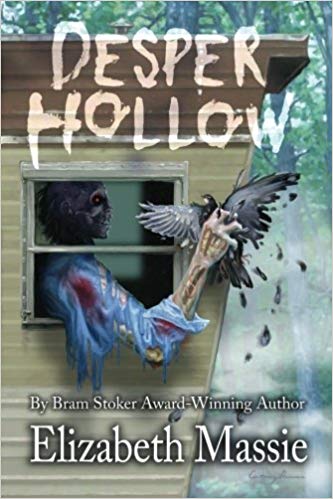 Just a couple of weeks ago I was talking about how a crime story fit uneasily into a second-world fantasy shell.  A country noir shell, on the other hand, is an excellent fit for any number of sorts of SF stories.  Including a zombie yarn.  Desper Hollow is just that: a country noir zombie fantasy set deep in the hollers of Virginia.

The framing that opens the book and slow reveals the zombie angle is a little weird and unwieldy, but it builds to an incredibly taut set piece in the final third of the book.

I was a little worried that Desper Hollow would be exploitative (not that, (1) I like that word and all its connotations and (2) that I would have been 100% opposed to such a thing)—a reality TV distortion of what Los Angeles execs imagine hillbillies to be.  Funnily enough, there is a reality TV angle.  But Massie knows her stuff; her remote Virginia hills are authentic.  (Except for the zombies, I guess, but meth heads are basically zombies.)

Like I said, the initial structure and how the zombie angle are introduced is awkward.  Especially since Massie gives us a slow reveal of what the copy states outright.  There are strange happenings afoot.  Suze Mustard burns down town, then cuts of her own hand and dies on the way to the hospital.  The Mustards are a hillbilly crime family, formerly headed by Granny Mustard.  She is dead but she left her angry, stupid, and morbidly obese granddaughter Jenkie Mustard with an evil grimnoir that is icy to the touch, the remainders of her magic moonshine, and a trailer full of zombies (or Hollows, as Jenkie calls them).

The cast of characters is relatively small, mostly consisting of Jenkie; two of her male cousins, an idiot-savant electronics whiz, Bink, who assists her; Kathy Shaw, who left the hills for the better life offered waiting tables in Virginia Beach but who will be called back home; Hank Shaw, Kathy’s mountain preacher father; Jack, a reality TV show producer and his cameraman, Sam, an eastern Tennessee native; and Armistead, one of the Hollows.

The chapters written from Armistead’s POV are a highlight.  Massie does a great job showing the torture of being a Hollow, trapped inside a decaying body with greatly reduced intelligence and a driving HUNGER.

The start is slow and is the only thing really holding the book back, but once Kathy and Jack both wind up in Desper Hollow things really pick up.  The suspense of the final, long sequence is delicious.  Massie also slowly reveals the secret that led to the events of the book, and I won’t spoil it, but it is one very much in keeping with hillbilly folklore.

This was my first of three spooky country noir reads for this Halloween season.  Check out the remaining two here.

Disclosure: Apex sent me a review copy of Desper Hollow for their September backlist promotion.