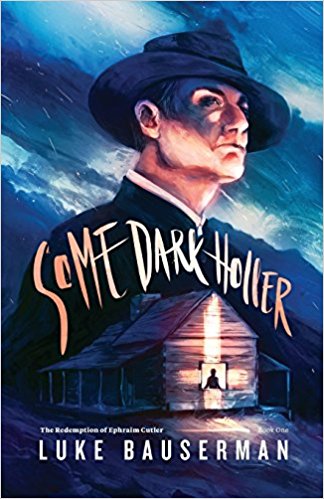 For Halloween I’m returning to the motif of selling your soul.

Bauserman pitched an advanced copy of Some Dark Holler to me because I reviewed a collection of Manly Wade Wellman’s Silver John stories.  I get a lot of these, usually with the author comparing their work to some colossus in the field.  But I couldn’t resist, being a huge fan of both country noir and speculative fiction.  I didn’t remotely expect Bauserman’s work to live up to that of Wellman, a master unequaled today in my eyes.  Does Bauserman’s work live up to Wellman’s?  I can hardly believe I’m writing this, but it very well may exceed it.

Some Dark Holler opens at the close of the Civil War.  Death arrives at a meeting with Scratch (the Devil) and two of Scratch’s lackeys.  A deal with the Devil will protect you from death for seven years.  In return all you have to do is deliver another soul.  William is his number one recruiter.  The first chapter (you can listen to the audiobook version on YouTube) ends with Scratch sending William after a boy named Ephraim.

(There is actually a really cool explanation for Death’s involvement and how he works.  Every human has a mortal imprint (“a kind of long shadow that trailed from his being and connected him to death”).  That allows Death to collect without personally attending to it.  If you sign a deal with the Devil, Death removes his imprint.)

Ephraim has grown into a fine young man and a fine hunter in Sixmile Creek.  He is respected and well liked by young and old, but he never quite feels comfortable with either his well off friend Peyton Henson or with Isabella, the general store owner’s daughter who has her eye on him.  Ephraim’s daddy got killed in the Civil War and his mother leans mighty heavy on him.  He lives in mortification that his friends will come to his cabin and hear her talking to his father’s gun.  Nancy, a granny woman who goes barefoot and has her goat pull her cart, and Reverend Boggs, who believes doctoring and taking a tithe are equally grievous sins, round out the main cast.

Bauserman starts thing at a slow boil, introducing the setting and characters.  The story really kicks off when Ephraim’s mother Lucretia demands he kill Peyton’s brother in retaliation for his daddy’s death.  Silas fought for the Yankees, and that is as good as killing him himself in Lucretia’s eyes.

For a hillbilly like me, stories set in the Appalachian Mountains live or die by their voice.  Bauserman absolutely nails it.  Not just the way we talk, but the way we think and act.  This may be a debut novel, but the voice is right up there with a Manly Wade Wellman or a Ron Rash.

This isn’t quite Ron Rash’s Appalachian Mountains.  This is a world where the legends and myths and superstitions of its people are frequently real.  It is a world where all that separates a granny woman from a witch is casting a single hex.  You can ward off evil by crossing two sticks and pouring salt over it or with a horseshoe.  Or, better yet, hurt it with iron.  You can always tell a witch by her (or his) evil eye.

Manly Wade Wellman wrote for the pulps, and there has been a lot of talk in circles interesting in reviving pulp-style stories about moral peril.  Misha Burnett defines it better than I ever could:

Consequences are more than just material. In Pulp stories there is not simply the risk that that the hero may fail to defeat the villain, there is also the greater risk that the hero may become the villain. A hero should have a code to follow, and lines that he or she is resolved not to cross. That line should be close enough that the temptation to cross is real—maybe not constantly, but from time to time. There is almost always a really good reason to break one’s moral code, particularly to protect a loved one in danger.

One of the things that makes Some Dark Holler great is that it is all about moral peril.  How could a book about selling your soul to the Devil not be?  But it isn’t just the ultimate decision that we know Ephraim will be faced with.  He is faced with several decisions putting him in moral peril before that.  As are the other characters.  Characters make real sacrifices in making these decisions, and they don’t always make the right decision.  This is a book with a real moral core, and it is remarkable the complexity and nuance it brings to these issues without ever losing that core.

Bauserman is also offering a companion background research book – Six Tales From Sixmile Creek.  I haven’t quite finished it, but it is full of tidbits and wonderful stories he came across in researching his book.  Oh, and that name?  It comes from a Dwight Yoakam/Nitty Gritty Dirt Band song.

SF: Some Dark Holler by Luke Bauserman was originally posted at Every Day Should Be Tuesday.

15 thoughts on “SF: Some Dark Holler by Luke Bauserman”